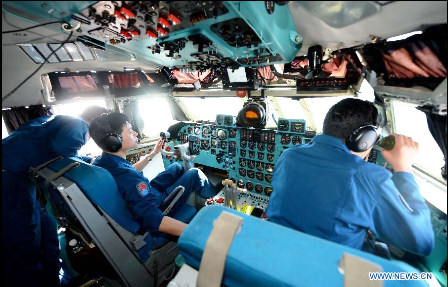 KUALA LUMPUR, March 12 (Xinhua) — An unidentified object was plotted on military radar at 2:15 a.m. last Saturday in an area over the northern Malacca Strait, a Malaysian official said, as the multinational search operation to locate the missing plane further expanded on Wednesday.

Malaysian Air Force Chief Rodzali Daud told reporters here in a press conference that the signal was detected by the military radar at 2:15 a.m. on Saturday about 200 miles (320 km) northwest of Penang island.

“I am not saying it’s flight MH370. We are still corroborating this. It was an unidentifiable plot,” he said.

Earlier on Wednesday, the air force chief denied report that military radar had tracked MH370 flying over the Strait of Malacca, although he did not rule out the possibility that the aircraft turned back before it vanished from radar screens.

The search areas have been expanded in the Strait of Malacca and South China Sea, he said.

Forty-two ships and 39 aircraft have been deployed so far in hunt for the Boeing 777-200 plane with the involvement of 12 countries, he added.

India, Japan and Brunei were the latest to join in a massive search mission.

When asked by Xinhua about reports that dead bodies were found near Penang, he said he could not verify this.

Flight MH370 carrying 227 passengers and 12 crew vanished early Saturday on its way from Kuala Lumpur to Beijing after losing contact with air traffic control in waters between Malaysia and Vietnam. However, no trace of the plane have been found.