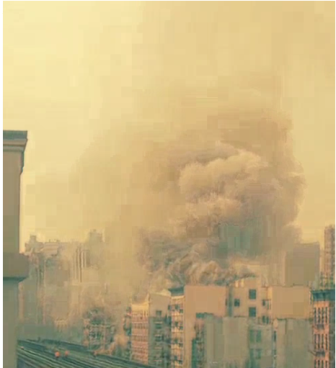 Two people are dead, 18 are hurt and others are missing after two buildings collapsed following an apparent explosion triggered by a gas leak that rattled upper Manhattan on Wednesday morning.

The two five-story buildings at the northwest corner of 116th Street and Park Avenue in Harlem collapsed around 9:30 a.m., sources tell NBC 4 New York. FDNY says 16 to 20 people are injured, and two people have been killed.

New York Mayor Bill de Blasio told reporters at the scene that there are a “number of missing individuals” and every effort would be made to verify their safety and whereabouts.

“From what we know now, the only indication of danger came 15 minutes earlier when a gas leak was reported to ConEd,” the mayor said. “The explosion happened before that team arrived.”

“This is a tragedy of the worst kind, because there was no indication in time to save people,” de Blasio said.

Smoke billowed into Central Park and could be seen from miles away in midtown, and New Yorkers said they felt rumbles as far away as 150th Street. Closer to the collapse, groceries were knocked from store shelves and debris floated through the air.

City officials said the buildings are destroyed. The cause of the apparent explosion is not known; members of the Joint Terrorism Task Force have responded to the scene out of an abundance of caution, authorities said.

“I thought a train had exploded,” said Marisa Aquino, who was at her apartment on 115th Street between Park and Lexington. “There are a ton of firefighters and a lot of smoke. Cops and first responders are everywhere.”

“It sounded like a bomb. That’s what it really sounded like,” Trey Dey, a laborer who was working in a nearby basement when the buildings exploded, told NBC 4 New York.

One real estate website lists one of the buildings as having six residential units and one commercial space.

Metro-North service has been suspended out of Grand Central because of debris on tracks.